US Fracking Boom Could Tip World to Edge of Climate Disaster The fate of the vast quantities of oil and gas lodged under the shale, mud and sandstone of American drilling fields will in large part determine whether the world retains a liveable climate. And the US, the world’s largest extractor of oil, is poised to unleash these fossil fuels in spectacular volumes.

Planned drilling projects across US land and waters will release 140bn metric tons of planet-heating gases if fully realised, an analysis shared with the Guardian has found.

The study, to be published in the Energy Policy journal this month, found emissions from these oil and gas “carbon bomb” projects were four times larger than all of the planet-heating gases expelled globally each year, placing the world on track for disastrous climate change.

The plans include conventional drilling and fracking spanning the deep waters of the Gulf of Mexico to the foothills of the Front Range in Colorado and the mountainous Appalachian region. But the heart is the Permian basin, a geological formation 250 miles wide that sits under the mostly flat terrain of west Texas and New Mexico.

One lobe of this formation, known as the Delaware basin, is predicted to emit 27.8bn metric tons of carbon during the lifetime of planned drilling, while another, known as the Midland basin, will potentially unleash 16.6bn tons of emissions.

It means the US, the centre of the world’s addiction to oil and gas, will play an outsized role in the heatwaves, droughts and floods that will impact people around the planet.

“The Permian is where a lot of the shale upstream investment will go and companies are getting better and better at extracting oil from there,” said Sam Ori, the executive director of the Energy Policy Institute at the University of Chicago. “In an environment where it is profitable and where there is a market for oil, it is hard to think there won’t be drilling there for decades to come.”

Extracting oil and gas through unconventional methods such as fracking has expanded rapidly across the US over the past two decades, with at least 17.6 million people living within about half a mile (1km) of an active well.

Further expansion will be catastrophic for climate change, and poses a growing threat to the health and wellbeing of families and communities living near drilling sites. 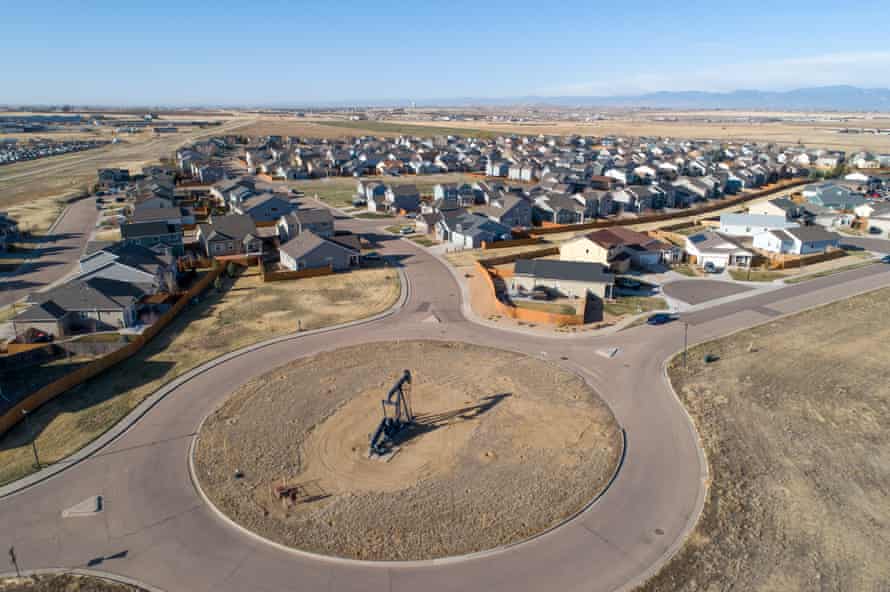 Residents of neighbourhoods in Weld county, such as this one in Dacono, live among oil and gas operations. Photograph: Ted Wood/the Guardian

Colorado is the country’s fifth-largest oil producer, with 90% coming from just one county: Weld, where the lack of federal regulation has led to the rapid spread of fracking wells in residential areas close to homes, schools, hospitals, and shopping malls.

“Wells are like trees here, it’s normal to see one on every block. We’re surrounded by them,” said Raquel Venegas, 34, a paralegal whose children attend Bella Romero school, where 11 fracking wells operate 210 metres (686ft) from the playground.

Compared with traditional drilling, fracking is linked to higher levels of exposure to toxic air pollutants and poor water quality, as well as unhealthy noise and light pollution. Numerous studies have suggested elevated rates of congenital heart defects, childhood leukaemia, asthma, and premature births in neigbourhoods close to fracking sites, while elderly people living near or downwind are more likely to die prematurely.

Yet tens of thousands of oilwells, dredging up more than a third of US oil production, dot the Permian basin and production is about to escalate. Exxon has said it will boost production from the Permian by 100,000 barrels a day this year, while Chevron is upping its output by 60,000 barrels.

The productivity of new wells in the Permian is expected to hit a record high in 2022, with next year forecast to be a landmark for the US as a whole – a record 12.6m barrels of crude oil pumped each day across the country.

In March, a record 904 drilling permits were issued for companies operating in the Permian basin, according to the consultancy Rystad Energy. Typically, about 400-500 permits are approved each month but elevated oil prices and strong demand have caused an “unprecedented” and “extreme” increase, Rystad says.

“The Permian is one of the hottest hotspots in the world for energy production – and it’s only going to grow,” said Michael Webber, an energy policy expert at the University of Texas.

Colorado, a western state with a dramatic landscape of mountains, forests and canyons, is the seventh-largest gas-producing state. In 2019, it accounted for almost two-fifths of the country’s coalbed methane production.

Oil and gas have been extracted for more than a century from the Denver-Julesburg basin, which underlies the state’s largest population hubs on the eastern side of the Rocky Mountains. However, production has risen exponentially over the past two decades thanks to the fracking boom.

In recent years, Colorado has been hit by wildfires and floods linked to global heating, and the decline in snowpack on the mountains is fuelling drought and water shortages across the west. It also has some of the worst air quality in the country, with emissions from oil and gas operations accounting for 30-40% of locally produced ozone along the Front Range – the eastern plains of the Rockies, where most of the state’s 52,000 active wells (three-quarters are fracking sites) are located. 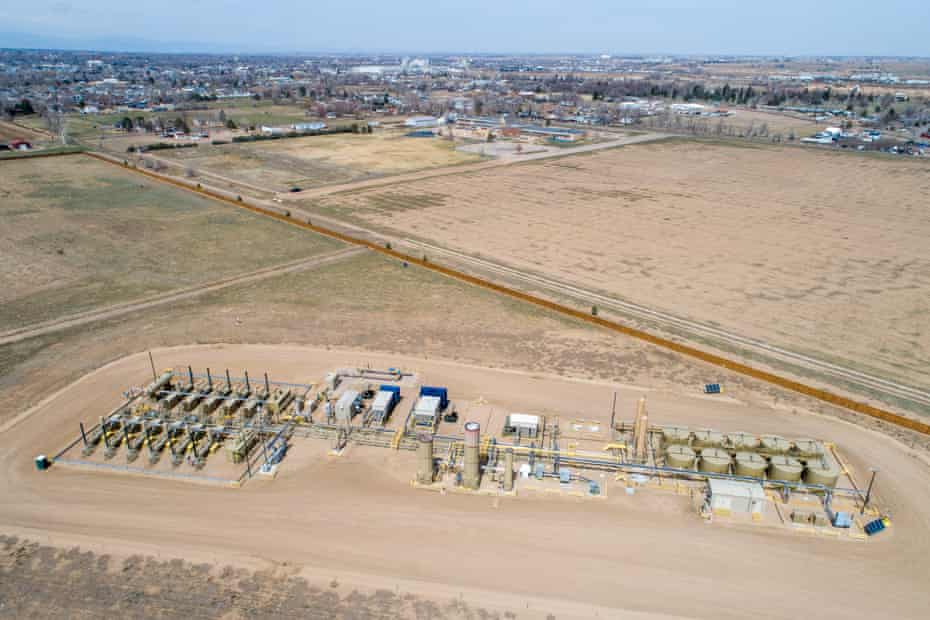 A couple of years ago, elevated levels of the carcinogen benzene were detected at Bella Romero school, which is attended by mostly Black and Brown children from low-income households who often experience nosebleeds, irritated eyes and respiratory symptoms.

Venegas said: “I worry about dying from climate disasters like fires and floods and get anxiety attacks if I think about what the wells are doing to my kids, it’s too scary.”

Around the most heavily drilled areas, the fear and anxiety about the unknown dangers coupled with a sense of impotence have led to high levels of stress and reported mental health problems including depression.

“The uncertainty and powerlessness people feel has a corrosive impact,” said Stephanie Malin, an associate professor of sociology at Colorado State University. “Plans to continue with fossil fuel extraction hangs on the industry’s pivot from climate denialism to the individual responsibility narrative that makes people feel hopeless and disempowered.”

A doctors’ group revealed this year how the industry had hidden the use of PFAS – a class of toxins also known as forever chemicals – in more than 12,000 wells by claiming them as trade secrets.

After years of campaigning by grassroots activists, regulations have gradually been tightened, and in March the Colorado Oil and Gas Conservation Commission made history by denying its first permit – temporarily halting the state’s largest producer’s proposal to build 33 wells close to 62 homes.

New legislation, which changed state regulators’ mission from promoting oil and gas development to protecting public health, safety, welfare and the environment, stipulates that wells must be set back 2,000ft from property lines. Nevertheless, the company has been invited to reapply as exceptions can be granted, which campaigners argue weakens the legislation.

“It’s been like the wild west. There’s so much money behind the industry, it’s impossible to win,” said Therese Gilbert, a middle-school teacher and activist who says she was frequently harassed during her eight-year crusade for better regulation. Now she fears another boom. 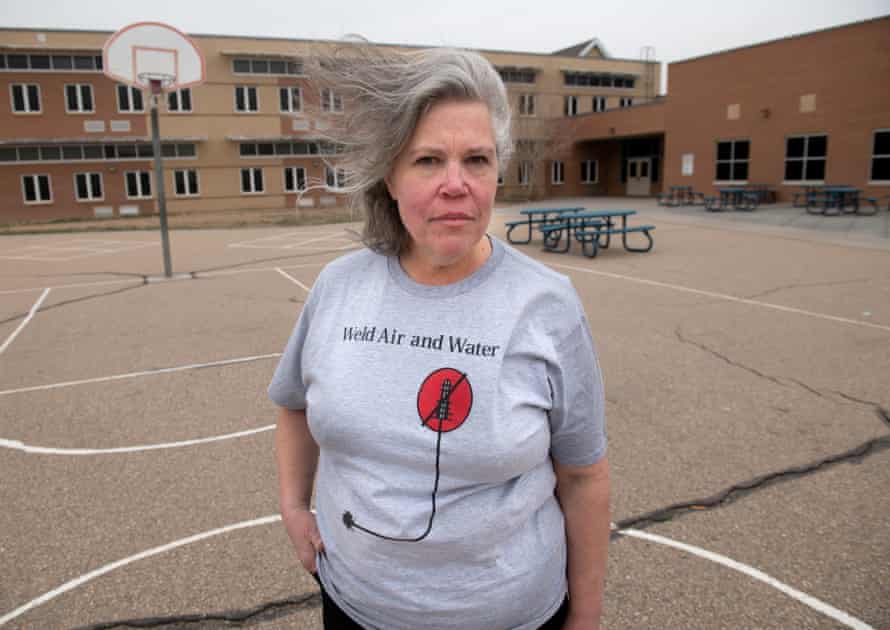 “[The Russian war in Ukraine] is going to set climate change initiatives back under the cloak of patriotism when weaning ourselves off oil dictatorships and pivoting to renewables would be the patriotic choice,” she said.

The state’s much maligned roadmap to reduce greenhouse gas emissions allows for oil and gas drilling to increase substantially by 2030.

And there are signs the state’s ties to oil and gas will continue long into the future: the Wattenberg field in Weld is the fourth-largest US oilfield and ninth-largest gas field based on proved reserves. There are about 3,000 unused fracking permits and operators keep applying – and getting – more, as evolving technology allows companies to access shale oil and gas that were previously inaccessible, according to Kate Christensen from the nonprofit 350 Colorado.

Retirees David and Dee Runcorn* moved to a brand new neighbourhood in Larimer county last year to be closer to their grandchildren and “live in harmony with natural wildlife”, as promised by the developer. The couple, who chose this oasis after checking there were no wells nearby, enjoy a landscape view of the Rocky Mountains as well as nature trails in lakes and shrubland. 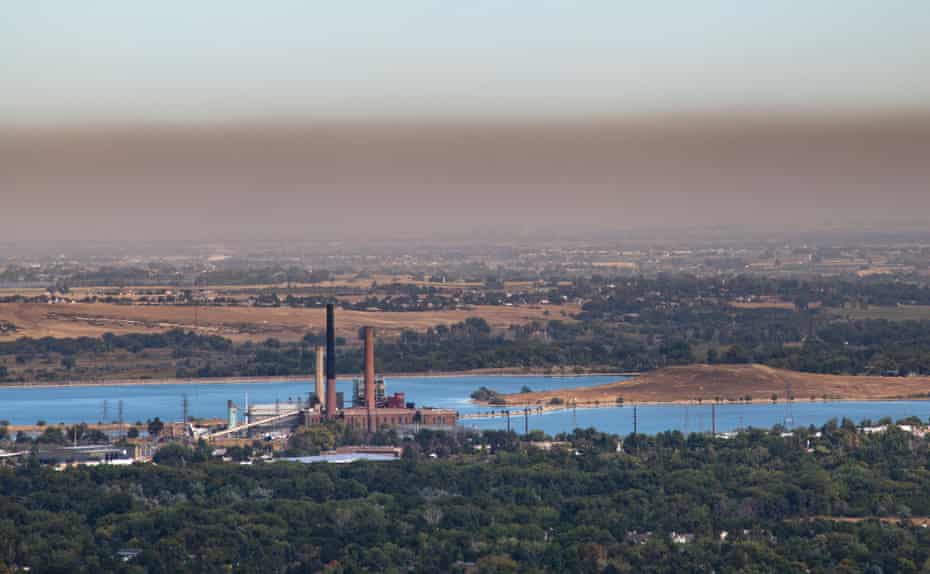 A brown cloud of pollution, caused in part by the nearby oil and gas operations, stretches along the Rocky Mountain Front. Photograph: Ted Wood/the Guardian

But the developer recently announced plans for 26 wells on two pads a couple of miles from the house. “It doesn’t make sense, this is a short-term fix. Oil and gas are limited resources, so if we want to be energy independent we have viable alternatives. It’s a no-brainer: we have to pivot to renewables,” David Runcorn said.

Until then, more fracking means more misery for communities close to the state’s largest oil refinery, which processes almost 100,000 barrels a day in a noxious industrial corridor.

In a Mexican neighbourhood close to the refinery, which has repeatedly violated pollution standards, the high school is one of the state’s worst performing.

Lucy Molina, a resident and activist whose teenage daughter has debilitating migraines, blames the poor attendance and education outcomes on the noise, putrid smell, air and water pollution.

“This is a sacrifice zone where you see how climate change is directly related to environmental racism. The industry and politicians bank on our misery, they would frack our asses and our souls if they could.” 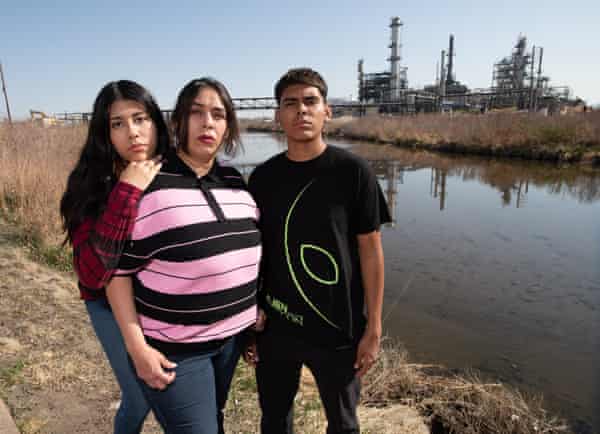 Lucy Molina and her children, Omar and Hannah, next to Sand Creek by the Suncor refinery in Commerce City, Colorado. Photograph: Ted Wood/the Guardian

The Colorado Oil and Gas Association did not respond to repeated requests from the Guardian for comment.

The US’s goliath output of oil is partly a consequence of the global oil shocks of the 1970s, when the country vowed to become more self-dependent for its fossil fuel supply.

The US is now a net exporter of oil, although this production has come at a huge cost to the climate – not only from the oil burned but also the enormous amount of greenhouse gases vented directly by wells. The explosion in drilling in the Permian has even triggered a spate of earthquakes in Texas.

Todd Staples, the president of the Texas Oil and Gas Association, said the intensity of methane emissions from the Permian basin had fallen even as production ramped up, and that oil from the region was extracted in a cleaner way than in other countries.

“No one in the world produces the oil and natural gas needed to power modern life in a more environmentally responsible way than American oil and natural gas producers,” he said. “Now is the time for America to develop a forward-looking energy plan that recognises the importance of a strong domestic oil and natural gas industry that can provide the energy and security America and our allies need while advancing climate progress.” 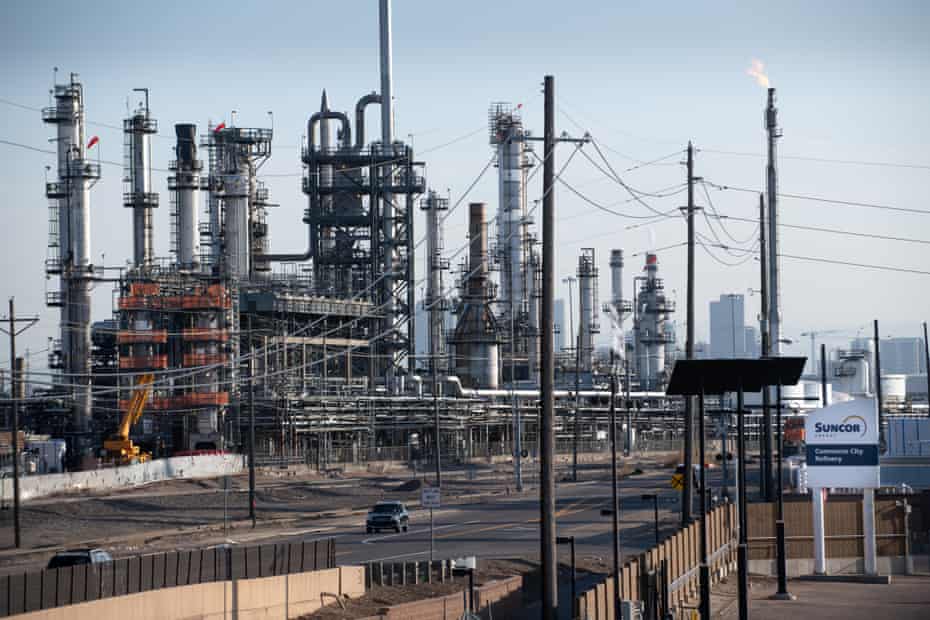 There is significant political pressure to increase domestic drilling in response to the Russia-Ukraine war, which has caused global oil prices to soar and the US to ban Russian oil imports. Large oil companies are considering an expansion in drilling should the high oil price linger.

“We are wholly dependent upon oil and the crisis in Ukraine shows us that dependency is freighted with many costs, including national security,” Ori said. “We can’t drill our way out of this problem. It’s been a good reminder that we are the world’s top oil producer and that still has not insulated us from this crisis.

“We have an oil-based system, so to change that we need to reduce the demand for oil. Europe is moving forward with targets on clean energy, and hopefully this crisis will give a big push to that in the US too.”

*Names have been changed owing to fear of reprisals.