Support for unions is on the rise as workers take action to raise pay and conditions amid booming company profits. Thousands of workers around the US are going on strike or threatening to do so heading into October, amid a recent surge of labor action activity in America and just one month before crucial midterm elections.

Support for labor unions in the US has grown over the past year, as a surge in organizing has resulted in workers winning union elections at major corporations including Starbucks, Amazon, Apple, Chipotle, Trader Joe’s, Google, REI and Verizon.

Union election petitions increased 58% in the first three quarters of fiscal year 2022, compared with 2021. Public support for labor unions is at its highest point since 1965, according to the most recent Gallup poll, with a 71% approval of labor unions in the US.

“Strikes appear to be increasing as we head into the fall,” said Johnnie Kallas, project director for the Cornell University ILR labor action tracker. “These strikes are being led by workers in the service sector. Starbucks workers have organized over 70 strikes so far this year in response to poor working conditions and employer retaliation. Over the past month, thousands of healthcare workers and educators have gone on strike to protest understaffing, low pay and poor conditions for patients and students.”

Last October was also dubbed “Striketober” by the US labor movement as a number of high-profile labor strikes and strike threats occurred throughout the month.

Some of the largest strikes in recent weeks in the US have included 15,000 nurses who went on a three-day strike in Minnesota, over 1,100 timber workers in Oregon and Washington, over 4,500 teachers and staff in Columbus, Ohio, more than 6,000 teachers and staff in Seattle, 2,000 mental healthcare workers in California, 1,200 casting plant workers at Stellantis in Indiana, and 700 nursing home workers in Pennsylvania.

Among the groups of workers that have recently authorized strikes include graduate workers at Clark University, while graduate workers at Indiana University will soon decide whether to resume a strike from earlier this year, about 800 auto workers at the Ultium Cells electric vehicle plant in Lordstown, Ohio, voted to authorize a strike for union recognition this month, and 115,000 railroad workers could still strike if they decide to vote down tentative contract agreements in the coming weeks.

UFCW Local 1059, representing about 12,500 workers at Kroger grocery stores in the Columbus, Ohio, area voted to authorize a strike on 16 September after rejecting the third contract proposal offered to members, Kroger’s latest and final offer.

A strike date hasn’t been set yet. A Kroger employee who voted in favor of authorizing the strike, but requested to remain anonymous for fear of retaliation, explained they feel they have no choice due to many longtime workers still receiving poverty wages while working short-staffed.

“I know for a lot of people that this strike is a really huge personal sacrifice to them, but we don’t have any other options,” the worker added. “We’re not trying to be greedy. But we’re just really tired and we sacrificed a whole lot during the pandemic.”

In Boston, about 300 workers at Sysco have a strike vote scheduled for 25 September as their contract is set to expire at the end of the month, with the union alleging Sysco has been dragging out negotiations, which Sysco has denied. Sysco workers have gone on strike so far this year in the Baltimore, Maryland, area and St Cloud, Minnesota.

“We’ve been called essential workers for the longest time and now it’s just empty words,” said Trevor Ashley, a driver at Sysco in Boston for over 20 years. 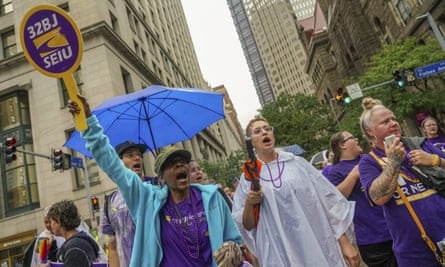 SEIU members shout their support for unions during a Labor Day parade in downtown Pittsburgh, on 5 September. Photograph: Steve Mellon/AP

In Buffalo, New York, over 6,300 healthcare workers at Kaleida Health voted to authorize a strike on 15 September amid their new union contract negotiations, with 96% in support. In the event of a strike, the unions representing workers will have to issue a 10-day notice.

“They left us no choice but to authorize a strike. For them to say they’re listening is not accurate,” said Kim Kornowski, a registered nurse at Millard Fillmore Suburban hospital.

Workers at Kaleida Health claimed staffing shortages and cuts have increased workloads and worsened working conditions throughout the pandemic, with hundreds of vacant positions that still need to be filled.

Kaleida Health has said it is making strike contingency preparations as they continue working to reach a contract with the union, but claimed the recent union proposal was too expensive.

“What we want is a fair contract that appropriately rewards our workforce and positions the organization for the future. That includes no concessionary bargaining, addressing staffing needs, and once again becoming the market leader in wages,” said a Kaleida Health spokesperson.